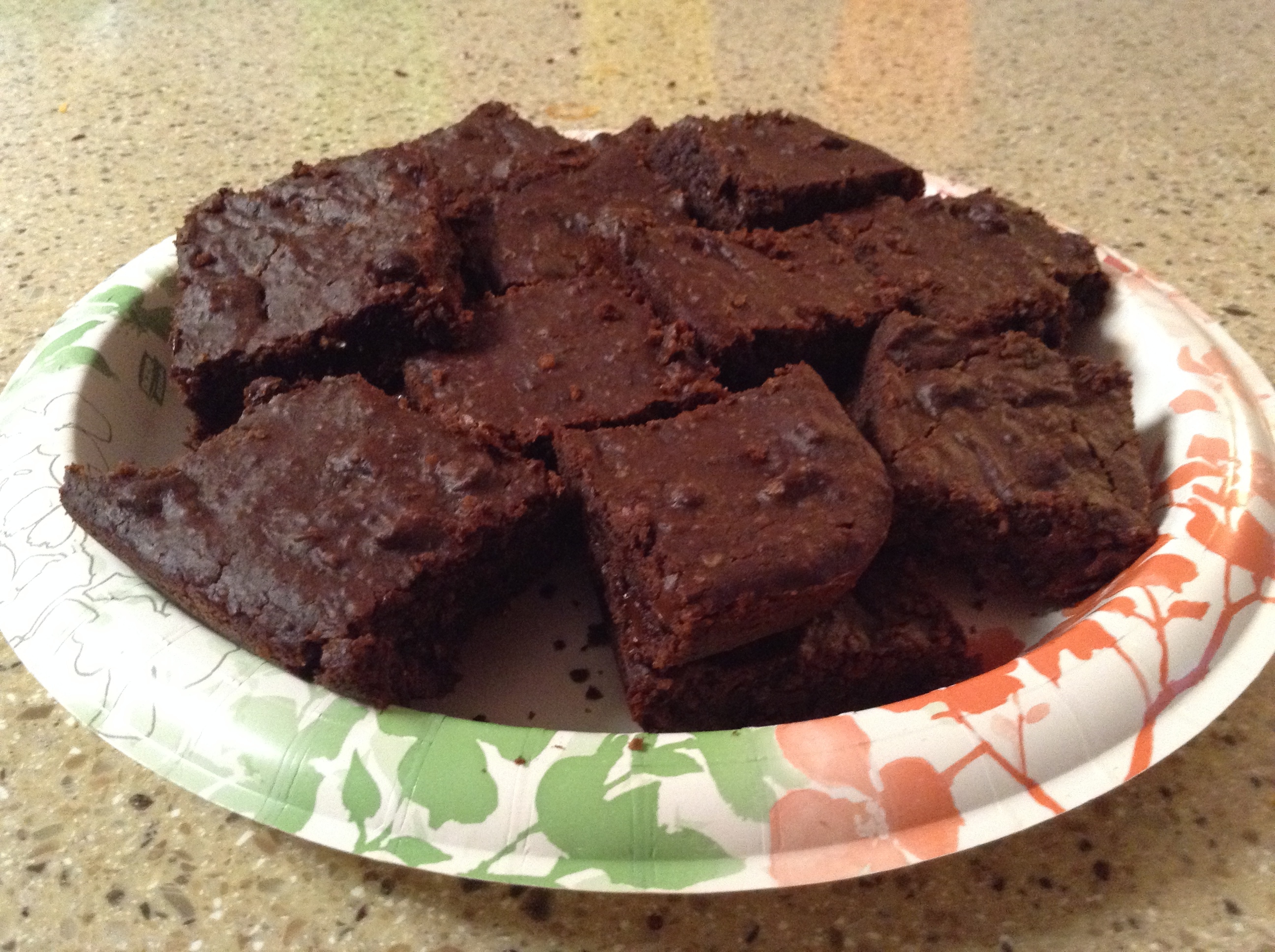 I love finding new recipes to try – if they sound good.  When I came across a recipe for Black Bean Brownies at Chocolate Covered Katie.com, I wasn’t sure what to think.  I’m used to black beans in tacos or other Mexican food.  To put them in anything else sounded odd, especially in a dessert like brownies.  But, I looked at the recipe, and it didn’t sound too hard to make.  It didn’t involve any chopping/cutting/dicing or anything that tends to take awhile to do.  So, the kids and I decided to make the brownies for a nice Sunday activity.

We had all the ingredients in the cupboard, so I put on my new apron (plus AJ’s matching one) and set to work.  We pulled out my new food processor, and the kids took turns putting the ingredients in.  I did have to make a few substitutions from the recipe: we used honey instead of the syrup, canola in place of the coconut/vegetable oil, and imitation vanilla extract. 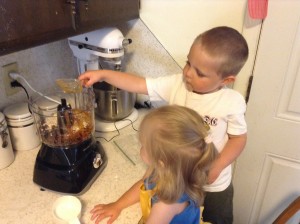 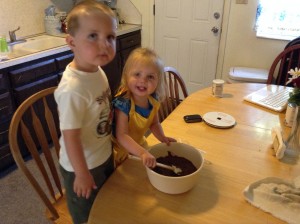 After that, we put the mix in a greased 8X8 pan and then put it in the oven at 350 for about 15 minutes.  The brownies were still a bit runny, so I put them in for another five minutes.

The buzzer went off a short five minutes later.  It wasn’t the buzzer that got me zooming to the oven, though – it was the sound of a crash.  PJ had heard the buzzer, put on my oven mitt, and tried to remove the pan himself.  He didn’t have a good enough grip, so it crashed to the bottom of the oven.  PJ wasn’t harmed in the process, thank goodness.  (My finger suffered a little burn, though)  The brownies suffered a little mushing, but no real doctoring was required.  If you have an oven lock, I HIGHLY recommend using it!

The verdict: You would NEVER guess that this was made from black beans.  They were chocolatey, moist, and a oh so good!  AJ wasn’t too happy when I told her she could only have one.  PJ ate his pretty quick as well.  Josh took a bite, and said he could tell there was a difference from the brownies we are used to.  That didn’t stop him from having two more pieces!

I gave my family a little taste at my birthday party, and there were mixed feelings.  However, I made them again about two weeks later for another birthday party with my in-laws.  I used semi-sweet chocolate chips this time, hoping for a little sweeter taste, and used a blender instead of a food processor.  I also doubled the recipe to accommodate for more people, and everything fit in a 9X13 pan (just double the time to about 30 minutes).  My in-laws loved them!  I tried the same recipe with my family a week later, and these brownies were enjoyed a lot more.  My brother-in-law ate at least four before I told him there were beans in it (he still went on to eat some more).

Final note: These brownies are not only delicious, but have more fiber than the normal brownie.  They also are gluten free and (depending on which ingredients you use) vegan.

I don’t think I’ll be buying brownie mixes any more.  I’ve fallen too much in love with these brownies to go back!