I’ve usually made them from a store-bought mix.  I figured all I would need to do would throw some chocolate chips in a mix and throw them on the griddle.  There was a problem, though: I looked at my pancake mix, and I didn’t have near enough to make a batch.  It was going to have to be from scratch.  I was wondering if I could find a healthy version.  While searching the web, I came across a healthy recipe for Healthy Chocolate Chip Pancakes from Kristin’s kNook .  So, I decided to give it a whirl! The ingredients were pretty easy:

The first thing I liked about this recipe was there weren’t “specifics”.  There was no feeling of “Oh no!  I have to go to the store!” because of a missing ingredient.  Everything in the recipe was something I already had on hand.  For my pancakes, I used whole wheat flour, low-fat vanilla yogurt, skim milk, and dark chocolate chips.  I also doubled the recipe, knowing my kids loved both chocolate and pancakes. Another thing I liked were the steps were so easy!  First, all the dry ingredients were mixed in a bowl.  After that, I added all the wet ingredients until they were pretty well combined.  Stir in the chocolate chips, and I had a batter ready for the griddle!  I used a 1/4 cup to scoop the batter onto the griddle, and had about six decent sized pancakes each time.  By the end of the batter, I had somewhere between 21-24 pancakes. 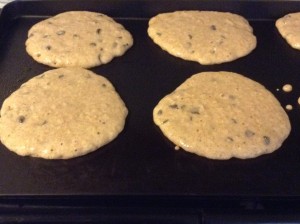 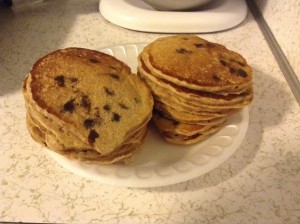 The Result: We sat down at the table, put a little syrup on the pancakes, and my kids were in heaven!  They soon had chocolate all over their mouths.  AJ, my picky eater, was on her third in no time.  PJ had two, but only because his first pancake was extra large.  Josh couldn’t get enough and had six!  These were so good, I even indulged myself a little and had one more than usual. Whether you are looking for a yummy recipe for breakfast, brunch, or even dinner, I highly recommend these! 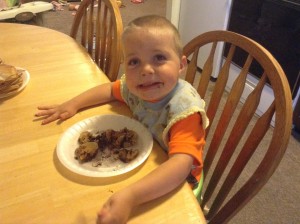