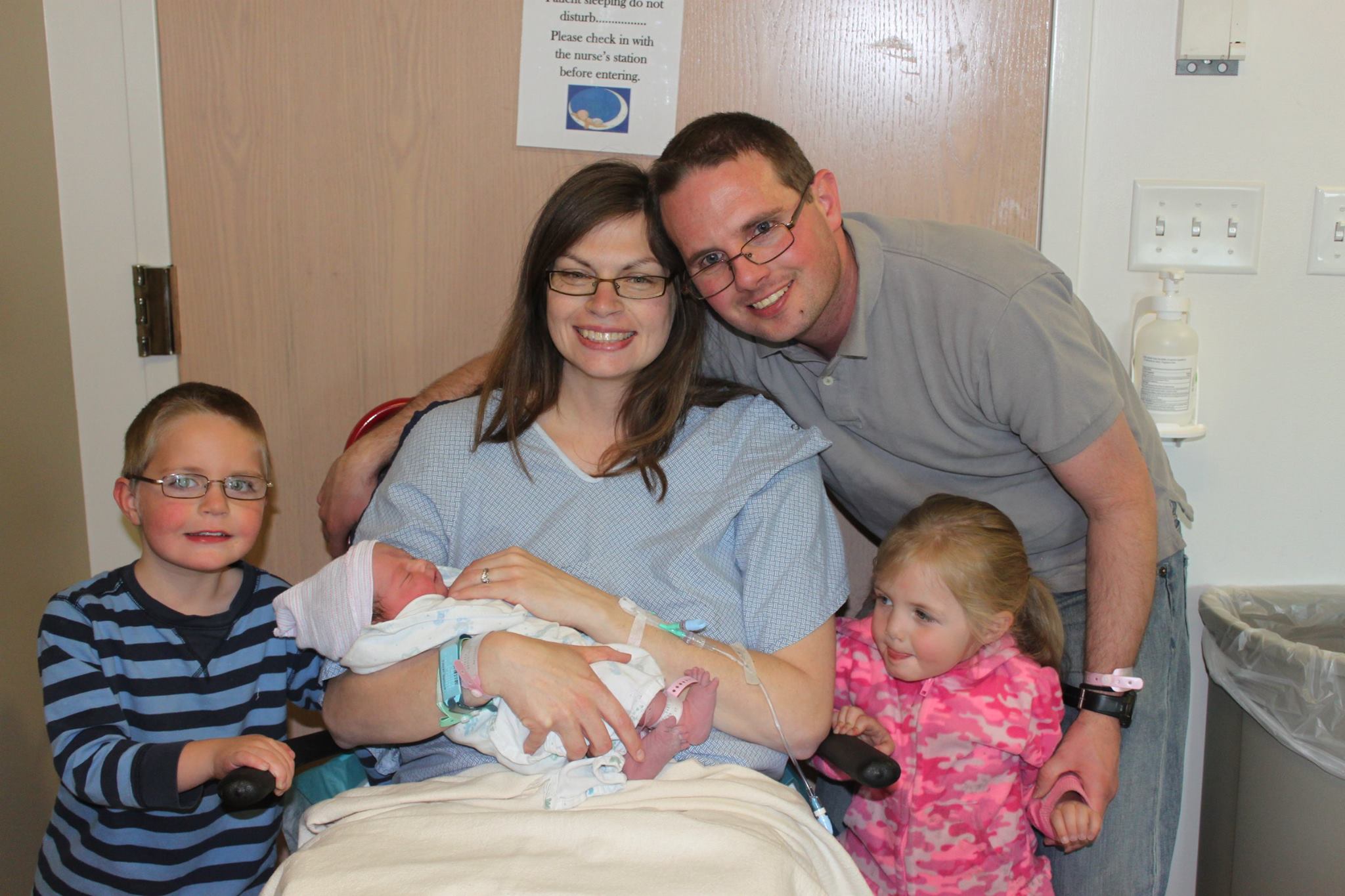 Wow!  Has it been a long time since my last post.

In July of 2015, I was really focusing on the blog.  People were asking me to write reviews, I was looking at paid advertising, and my brother-in-law did a redesign for me.  However, I soon had a feeling I needed to stop focusing so much on the blog.  Maybe it was because I was more concerned about making money than helping people.  Maybe because the blog was no longer fun.  Whatever the reason, I decided to take a break from writing.

Soon after this I stopped updating the blog, however, I found out that I was pregnant with baby #3!  However, joy soon turned to worry.  There was worry that I might have lost the baby, but an ultrasound dispelled that fear.  I told my OB my ultimate goal – I would like to have a VBAC. He wasn’t sure if I could since I’d already had 2 C-sections, but said with the changes I had made to my health, we could give it a try.  I would need to meet with a perinatologist at 20 weeks to get their approval, and we would see.

During the pregnancy, I did my best to keep up my healthy habits.  I bought two of Lindsay Brin’s pregnancy DVDs.  I was still walking or biking everywhere.  I watched what I was eating – a little too well.  Ultrasounds from the doctor’s office showed the baby was a little small, and Josh was concerned it might be from me not eating enough.  I upped what I was eating, and further ultrasounds showed the baby was growing a lot better. 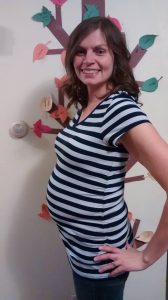 At 20 weeks, we met with the perinatologist.  The baby was fine, but they found something else – a velamentous cord insertion.  I still have a hard time explaining this, but basically some vessels of the umbilical cord didn’t insert directly into the placenta, and were therefore exposed.  This could effect the growth of the baby.  There was also a chance I could develop vasa previa – where these vessels covered the cervix.  If I had vasa previa, there would be no way to do a VBAC.  The baby could break the vessels, and then we would lose the baby.   They wanted to see me often to monitor the baby’s growth.

I felt devastated.  I had really been looking forward to going for a VBAC.  I was exercising, eating right, and doing everything to keep my body healthy.  Was it all or nothing?  Josh then brought me back to what was important with this thought: was my goal to have a VBAC, or a baby?  I realized how foolish I’d been and decided I wanted to hold my baby, no matter what it took.

A later visit with the perinatologist actually changed things.  She looked at the baby – who was growing just fine – and looked at the umbilical cord.  It was in a great place and I didn’t have vasa previa.  She said she saw no reason why I couldn’t attempt a VBAC (she kind of encouraged it).  I would still need to have non-stress tests twice a week, but everything else should progress as normal.

There wasn’t the best communication between my OB and the perinatologists.  When I went for my next check-up, he started telling me about vasa previa.  When I informed him that they said I didn’t have it and was good for a VBAC, he basically said “Oh.  Ok!  So, here’s what we’ll do.”  He kept monitoring me and the baby, along with the perinatologists, to make sure that all was going well.  He did say that I would need to go into labor on my own if I wanted to have a VBAC, something I had never done

Around the middle of March, I was getting tired.  I pulled a muscle doing some workouts, and had a hard time walking around.  My chiropractor couldn’t do much with me being pregnant, but tried his best.  The night after my adjustment, I felt something I had never felt before – a contraction.  PJ had been induced, and all of the pain was felt in my back.  AJ was a repeat C-section.  I had never had contractions on my own.  I was so excited – until they started coming stronger.  Then they just hurt!  The whole next day, they were coming at different intervals.  Sometimes they were closer, sometimes further.  Then at night they were just horrible!  I couldn’t sleep at all.  The only relief I got was sitting in a hot bath.

Early the next morning (I think about 4 or 5), I had Josh call my Mom.  She said she would be there soon.  It seemed like forever while I waited for her to get to my apartment.  I sat hunched over in pain, trying not to think about the contractions.  I would try to distract myself with a Studio C sketch or something else.  I realized I’m not a person who can sit and try to relax during a contraction – I’m one who needs to power through them.  So every time one came on, I started singing “This is My Fight Song.”  Mom finally arrived with my little sister who would watch the kids while we went to the hospital.

We were finally checked in about 7:30.  After the pain from the day before, I was shocked to find out I hadn’t progressed as far as I thought.  I kept putting off the epidural as long as I could.  My OB recommended one, but said it was up to me.  Everything I had read about having a successful VBAC said not to do an epidural. However, I was feeling pain in my back between contractions, and I didn’t know how much more I could take.  I finally decided to trust my doctor, instead of the Internet, and got the epidural.  I soon could no longer feel the pain, and was able to get a little bit of sleep after not having slept for over 24 hours.

Imagine my surprise when, instead of being wheeled in to a surgery room, they told me to get ready to push.  This was a new experience for me.  Because of the little rest that I had gotten, I had enough strength to push.  Before I knew it, I soon had a beautiful, dark haired baby girl put in my arms.  She was perfect – no cone head, and just beautiful.  Josh and I just stood there admiring our new little one.  I thought of all the pain and worry we had gone through to get her here, and I just felt overwhelmed with love.  Everything was worth it to hold that little one in my arms. 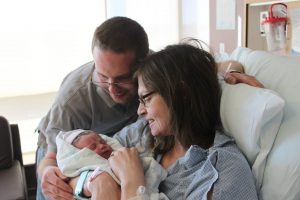 My OB was obviously very proud of what happened.  After my baby was born, he jokingly said “You know, it’s early enough in the year that you could probably have another baby before the year is out.”  I just smiled and said “I don’t think so.”   He later came to check on me and entered with a triumphant “You did it!”.  He also confided that he thought a big reason for my success was the changes I had made to get healthy, and stay healthy, prior to and during my pregnancy.

Two days later, Josh and I brought our new baby girl, KC, home with her brother and sister.

I was able to get what I had wanted.  Not only was I able to hold my baby right after she was born, but I was able to have a successful VBA2C.  I now have a bright eyed, beautiful 9-month-old who loves to jabber and crawl around.  She loves being with her brother and sister, and adores her dad.

My ultimate goal was to have a healthy baby, and that is what I have.  I have three beautiful children.  My new goal  is getting back to being a healthy, fit, and lively mom! 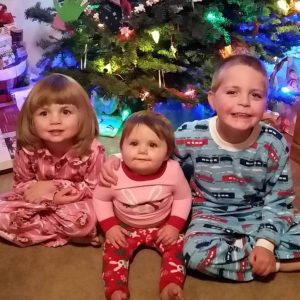