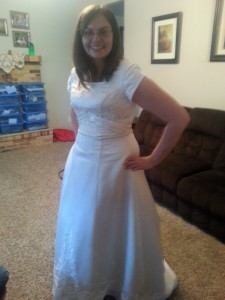 I am all for having goals.  Goals are what drive you to be better.  But instead of looking at what you didn’t do, look at what you have done.

When I started losing weight in August, I was doing great!  I was averaging about two pounds a week, sometimes as much as three.  I figured if I kept going at the pace I was, I should lose the weight in no time.  I set a couple of different goals, one being to fit into my wedding dress by my anniversary (February 13).  However, I hit that dreaded plateau in November.  I was stuck in the mid 220s, and nothing I seemed to do would help me budge.  I didn’t know if I was going to make my goal.

Well, February 12 came along.  I had finally broken past my plateau, but was nowhere where I thought I would be weight wise.  I was still ten pounds heavier than I was the day that I got married.  But, I’d set a goal, and I was going to see how far I’d come.  I went to my mom’s house where my wedding dress is being stored.  No one was there but my little sister, so I asked for her help in getting the dress on.  I put it on, and she zipped it up about halfway before it wouldn’t zip any more.  “If I pull any more, it’s going to rip.”  Now, for those of you who don’t understand wedding dresses, these things are designed to hold together.  I just told her to pull as hard as she could while I sucked in.  Then – to my amazement – the zipper reached the top.  I couldn’t breathe, and I didn’t dare move my arms too much, but I fit into my wedding d

Reality Vs. The Real World

I have been a fan of The Biggest Loser for years.  I was inspired by Jillian and Bob.  I rooted for my favorite contestants.  I imagined the weight loss that was on that show is what happened in real life.

However, there is something I have learned about reality shows – they are not reality.  They are just a new version of a soap opera.  The more I have watch The Biggest Loser recently, the more disenchanted I become.  Contestants will exercise their hearts out for a week, step on the scale, and be heartbroken when they “only” lose four or five pounds.

I watched a few episodes of Extreme Makeover: Weight Loss Edition, and was again not impressed.  People had a goal of losing X amount of weight by a certain date in order to qualify for prizes such as skin removal surgery.  The weight was taken every few months.  People were devastated when they didn’t reach their goal.

Now, if you had a goal, and you didn’t work your hardest, then yes, you have a reason to be disappointed.  But if you are doing your best and fall “just short,” I still say that is reason to celebrate.  My original goal was two-fold: weigh what I did on my wedding and fit into my wedding dress.  Honestly, I was heavier than I was the day I got married – but I still fit into my dress!  Should I beat myself up over those eight pounds I didn’t lose? NO!  I was celebrating what I did accomplish.

Every Body is Different

I’ve found that everybody is different, and every body is different.  I’m learning to not get down on myself just because I don’t lose as much weight as a friend did, or because I’m not as small as her.  I need to focus on what my body is capable of accomplishing.  What works for one person won’t always work for another.  Two people may have the same height and bone structure, but need different calorie budgets or exercises to lose the weight.

Not only is every body different, but our own bodies become different over time.  I have spent ONE week at the gym while I’ve been losing weight.  That entire week, I was working out like crazy at Zumba or on the elliptical, making sure I burned at least 500 calories a day.  I was super strict on my calories.  You know what?  I didn’t lose a pound.  I went back to my mall walks/at-home DVDs the next week, and lost a pound.  Christmas was the next week.  I didn’t work out as much and relaxed a little.  I was still counting calories, but I made sure I set some aside for a daily dose of chocolate.  I lost FOUR pounds that week!  What worked for me to lose weight one week may not work the next.  But I keep going.

Joshua and I made plans to take the kids on a little trip to Wyoming for my nephew’s blessing.  I had a goal for the date of the blessing: weigh in the 180s.  We were given a couple months notice, so I thought it was doable.  I had been doing an intense workout routine and was sure I could do it.  I weighed in the day before we left, and saw the number: 190.0.  One more ounce, and I would have hit my goal.  I at first felt devastated.  Then, I realized, there was no reason to feel that way.  So what if I had fallen just short of my goal?  I had still lost a lot of weight – and that itself is reason to be happy!

I have a calendar hanging on my fridge with my weekly goal written in pencil.  I am still about eight pounds heavier than my goal was for this week.  But, I don’t feel too sad about it.  It would be great to be that weight, but that doesn’t mean I won’t be there soon.  There are still plenty of reasons to celebrate.  I am more healthy and more fit.  I am fitting into a pair of capris I have never been able to fit into.  I bought a new swimsuit that I actually feel good in!

So keep setting goals and keep reaching for them.  Don’t beat yourself up when you fall just short of reaching them (unless you know you could’ve done better).  Focus on what you have accomplished, reevaluate your goals, and keep working to be better.  As the quote says, “Reach for the moon.  Even if you miss, you’ll land among the stars.”