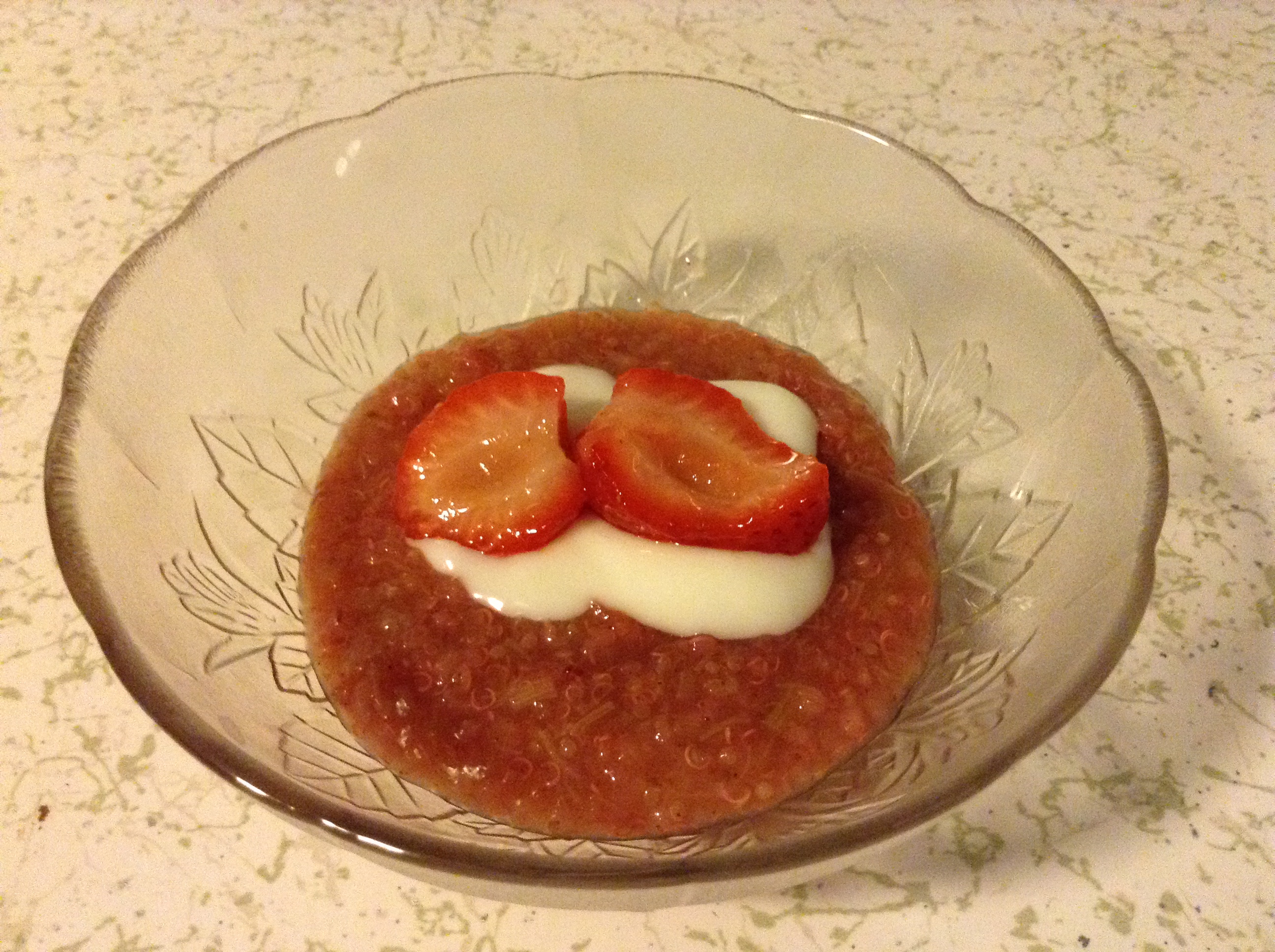 After making the pork chops with rhubarb sauce, I had some leftover rhubarb.  I didn’t want it to go bad, so I set out searching for another recipe I could make with it.  As usual, I turned to the source for most of my recipes: Eatingwell.com.  I soon found a recipe that sounded interesting enough to try: Strawberry Rhubarb Quinoa Pudding.  I had strawberries, I had rhubarb, and I had quinoa.  Seemed like the perfect recipe!

Substitutions.  When I set out to make this, I didn’t have al the ingredients like I thought I did.  I definitely didn’t have any lemon zest or Greek yogurt.  After some online searching, I replaced the lemon zest with 1 tablespoon of lemon juice, and decided to use some low-fat vanilla yogurt I had in the fridge.

As usual, the most time consuming part of the cooking for me was chopping the rhubarb and frozen strawberries.  Once those were chopped, I combined them with 2 cups of the water, the cinnamon, and the salt in a medium sauce pan.  Once the pan was boiling on the stove, I covered the pan and reduced the heat so the mixture would simmer.  I let it simmer for about 25 minutes.

While waiting for the pan to cook, I had an anxious little boy who wanted to constantly see and help.  So, he was given the iPad and told to “help” by taking pictures.

After the quinoa was cooked through, I removed it from the heat to stir in the sugar and lemon juice.  The cornstarch and remaining water had been mixed in another bowl, and this was then added to the pan as well.  I’m thinking I shouldn’t have the removed the pan, however.  The next step said to return the mixture to a simmer and then stir constantly for one minute.  However, it took about ten minutes for the the mixture to return to the simmering stage!  I watched it like crazy and stirred frequently, and did stir it constantly for one minute once it was simmering.

With as small a fridge as I have, I didn’t want to separate the pudding into six bowls.  So, I just poured the mixture into a small bowl and set it all in the fridge to chill.  The recommended time was at least an hour.

My best friend stopped by for a visit that evening, and we pulled out the chilled pudding to give it a try.  She wanted to try it plain.  I wanted to try the recommended topping of yogurt and strawberries.  We both loved it!  It had a unique texture combined with the sweetness of the strawberries and the tartness of the rhubarb.   My friend thought it was really good even without any toppings.

Josh enjoyed some during his lunch break, but enjoyed it even more once he added some whipped topping to it.  Both kids were given some plain pudding without topping the next day, and both were crying when they were told they couldn’t have any more!

So, would I recommend this?  Yes!  Everyone has loved it, and my friend wouldn’t stop talking about how good it was.  It’s a nice healthy treat that everyone can enjoy!