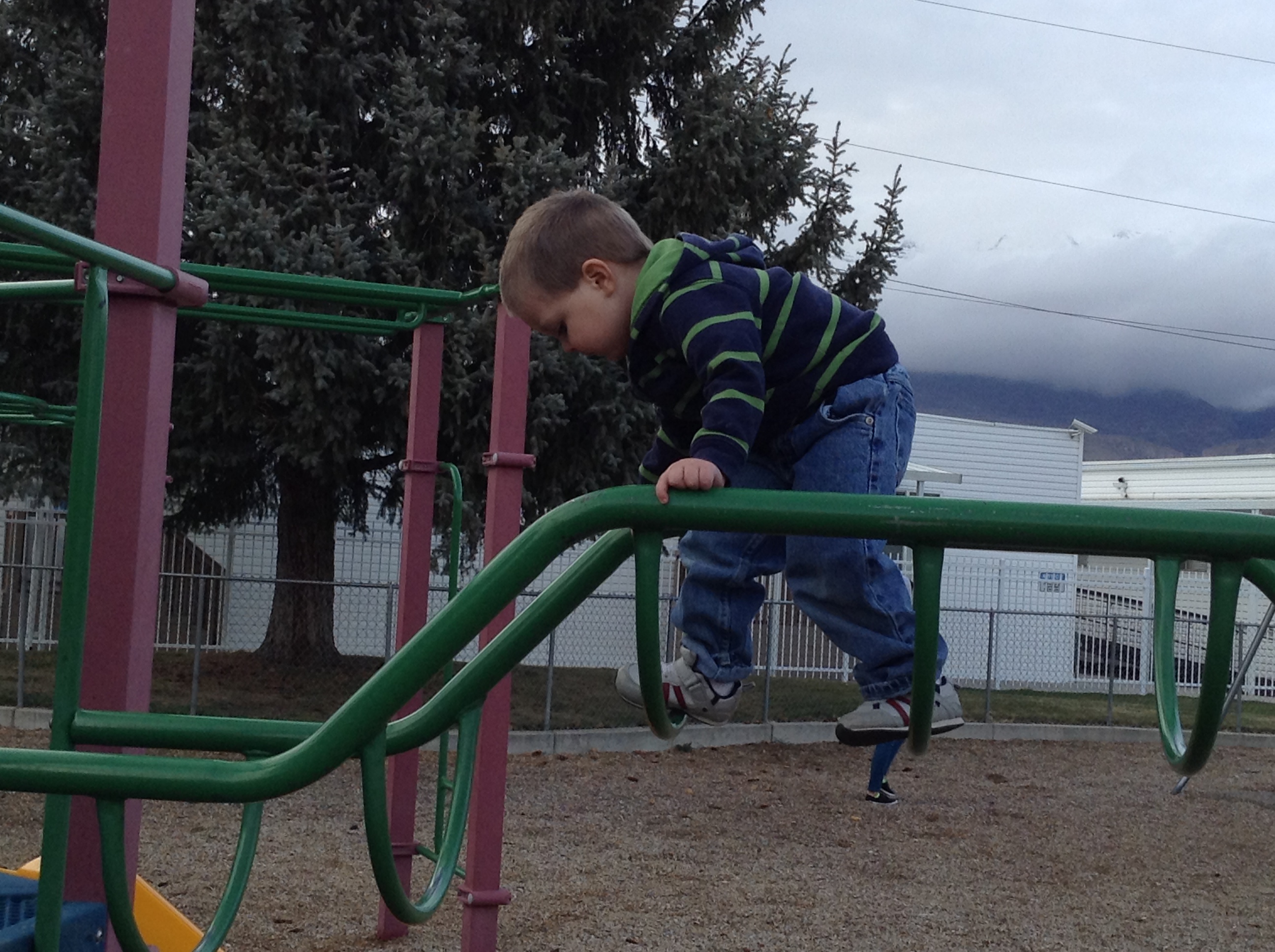 Success comes in cans, not in cannots
Joel Weldon

Growing up, my soccer coach (AKA Mom) had rules she would have us recite at every practice/game.  The last rule was always Positive Mental Attitude.  “If you think you can’t, you won’t.  If you think you can, you will.  And we will!”  I said this phrase so much growing up that I grew tired of it.  But oh how true it is!

The kids and I went to a playground the other day that was obviously designed with older children in mind.  PJ soon spotted what I call “rainbow monkey bars”. (Imagine something like the curved ladder he is climbing above, but with straight bars and curving back toward the ground – kind of like a rainbow). These bars went up to about 6 feet high before descending back down – pretty high for a two-year-old.    My little monkey started climbing once he spotted them.  Once PJ got near the top, however, he looked down and froze.  He started yelling “I want down!”.

Instead of taking PJ down, I told him “No, you can do this.  Keep going.”  He started saying “I can’t” and kept getting scared.  I looked at PJ and said “Don’t you say you can’t because you can!”  We then worked together on helping him climb down.  I would tap which hand or foot to move, or add a little support as he moved across.  With every new rung that he climbed, he kept saying “I can’t!”  I would repeat “Yes you can.”  After a couple more rungs, PJ moved one leg down between two rungs, and this allowed him to turn around and face the other way.  He was then able to finish climbing down on his own. I wish I had gotten a picture of how excited he was when he kept saying “I did it!  I did it!”.

We went to another park yesterday, and PJ was trying even more things than before.  Some I had to help him with, but others he was able to do on his own.  Each time he accomplished something, whether with help or not, he would jump up and down saying “I did it, Mommy!  I did it!”. 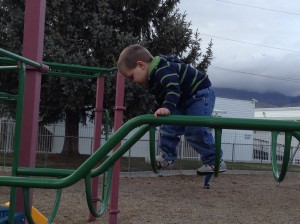 I feel a little like a hypocrite telling PJ “Don’t you say you can’t!” when I’ve done it myself.  Who knows how many times I have faced things and said “I can’t!”.  How many amazing experiences have I missed?  How many things could I have done if I had just kept going?

The most recent I can think of was just last year.  I made it about half way up a rock climbing wall before saying “I can’t” and repelling back down.  And this was a small rock wall too!  Come to think of it, I don’t think I have ever made it to the top of a rock wall.  What is it like to reach the top and have that feeling of accomplishment?  I don’t think I know.  But I plan to find out!

Who doesn’t know the story of The Little Engine That Could?  We weren’t taught that story when we were younger just so we could forget the lesson and grow up.  It’s as important now as it ever was!  If we do have that positive mental attitude and keep saying “I think I can!  I think I can!,” then we soon will be able to.

There are two other problems that a lot of us face when it comes to succeeding: stubbornness and patience.  Too many times I think we all try o do everything on our own.  It is ok, and sometimes necessary, to have help in succeeding.  I was there to help PJ climb the monkey bars.  Josh has been helping me with my weight loss by being more supportive than you can imagine.  Sometimes we can only make it so far before we need another person to help direct us on the next step to take.  And we often forget that we need to be patient with ourselves as we keep going forward.  Success doesn’t often happen overnight.

Words from the song “Defying Gravity” have been playing in my head over and over the past few days.

I have decided that, a week from Tuesday, I am going back to that rock climbing wall and I am going to climb it!  It may take awhile, and I may even fall.  But before my pass for that place expires, I am going to know what it feels like to reach the top!

It’s time to stop saying “I can’t” and start saying “I can!”.  It’s only then that we’ll know what we are capable of accomplishing.