Korean turnkey burgers.  What was I thinking?  I’ve never been a huge fan of Asian food, and have only had Korean food once in my life.  However, the food in the picture on Eating Well looked SO good.  What harm could it do, and how hard could it be?

Actually, this was one recipe that was pretty easy.  It had simple ingredients:

I already had some ground turkey in the freezer, and the other ingredients were going to be pretty easy to find (or so I thought).  I went to the Asian food section of my favorite grocery store, only to find they didn’t have everything I was looking for.   I found an Asian store near my home, so we made a quick visit there and found our gochujang, scallions, and kimchi.

The turkey wasn’t thawing in the fridge like I thought it would, so I put it in some cold water to speed it up.  The turkey did thaw quicker, but I’ve also noticed the quicker it thaws, the more water it retains.  While that thawed, I set to work on cutting up the scallions.  I had no idea how to do that, but luckily there is this great invention called Youtube!

The first thing I needed to do was combine the ground turkey, scallions, 5 teaspoons of the gochujang, and the sesame oil.  This wasn’t too hard to do – just mix everything with clean hands in a medium bowl.  While mixing, though, I noticed that things weren’t sticking together the way they should due to the water still in the meat. I also combined three more teaspoons of the gochujang with 2 tablespoons of light Miracle Whip in a tiny bowl. 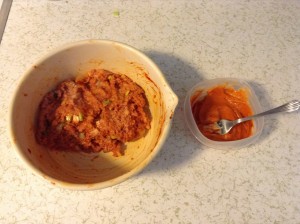 After I was done mixing, it was time to make some patties and throw them on the barbecue grill.  Problem was, I’ve never cooked using the barbecue grill before.  I got the grill started, and thought that was going to be the hard part.  I got the rack oiled, then put the burgers on and closed the lid.  I thought things were going great until I checked a few minutes later. 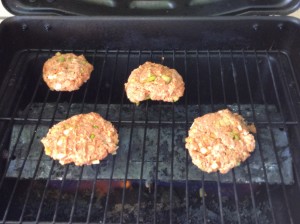 I realized the burgers were starting to drip down into the ashes, not staying solid on the rack.  I got scared that I was going to lose all of the meat, so I turned the grill off, grabbed a hot pad, and brought the rack into the house to finish cooking on my George Foreman grill.  In the process, however, I bumped the rack and lost an entire patty.  I finally just dumped what meat I had left back onto a plate and formed four new (though smaller) patties.  I put the turkey burgers on the indoor grill and shut the lid, hoping I’d solved my problem.

After about five minutes, I went to open my grill and check on my burgers.  When I lifted the lid, though, there was only one patty.  Confused, I found the three other patties stuck to the top of the grill.  I had forgotten to oil my indoor grill!  All the meat was thoroughly cooked, but as I tried to take the burgers of the grill, everything just ended up in a crumbled mess.  Frustrated, I almost threw everything away and was ready to head to McDonalds.  However, I decided to just create “patties” on the buns with what meat I had. 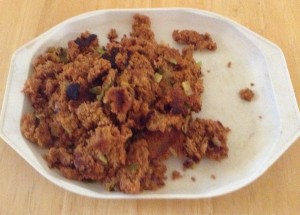 After placing the turkey “burgers” on the buns, I put some of the gochujang/miracle whip mixture on, followed by cucumber slices and 1/4 cup of kimchi.  With the top bun on, it was time to dig in and give it a try. 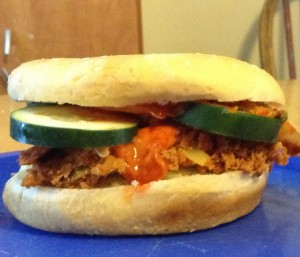 I first watched the kids to see how they would react.  PJ got a look after about two bites that let me know it was too spicy for him, so I grabbed him a cup of milk.  He quickly said “I don’t like this Mommy.”  I told him he didn’t have to eat it, but he chose to finish eating his kimchi.  He downed a few glasses of milk while eating it, and then he wouldn’t touch the rest of the burger.  Silly boy!  I then checked on AJ, my picky eater.  She was complete opposite of her brother!  She had maybe one or two bites of the kimchi, but ate most of her spicy meat.  You never know what your children are going to do with new food!

With the kids eating, it was my time to take a bite.  Again, I’ve never been a big fan of Asian, let alone spicy, food.  But as I bit into that burger, I liked what I tasted!  It was different, but very good.  Everything combined into this unique taste that I really enjoyed.

With a short list of ingredients and a quick cook time (if you know how to use a grill), this is one food that I wouldn’t mind cooking again.  Now if only the kids would feel the same way!