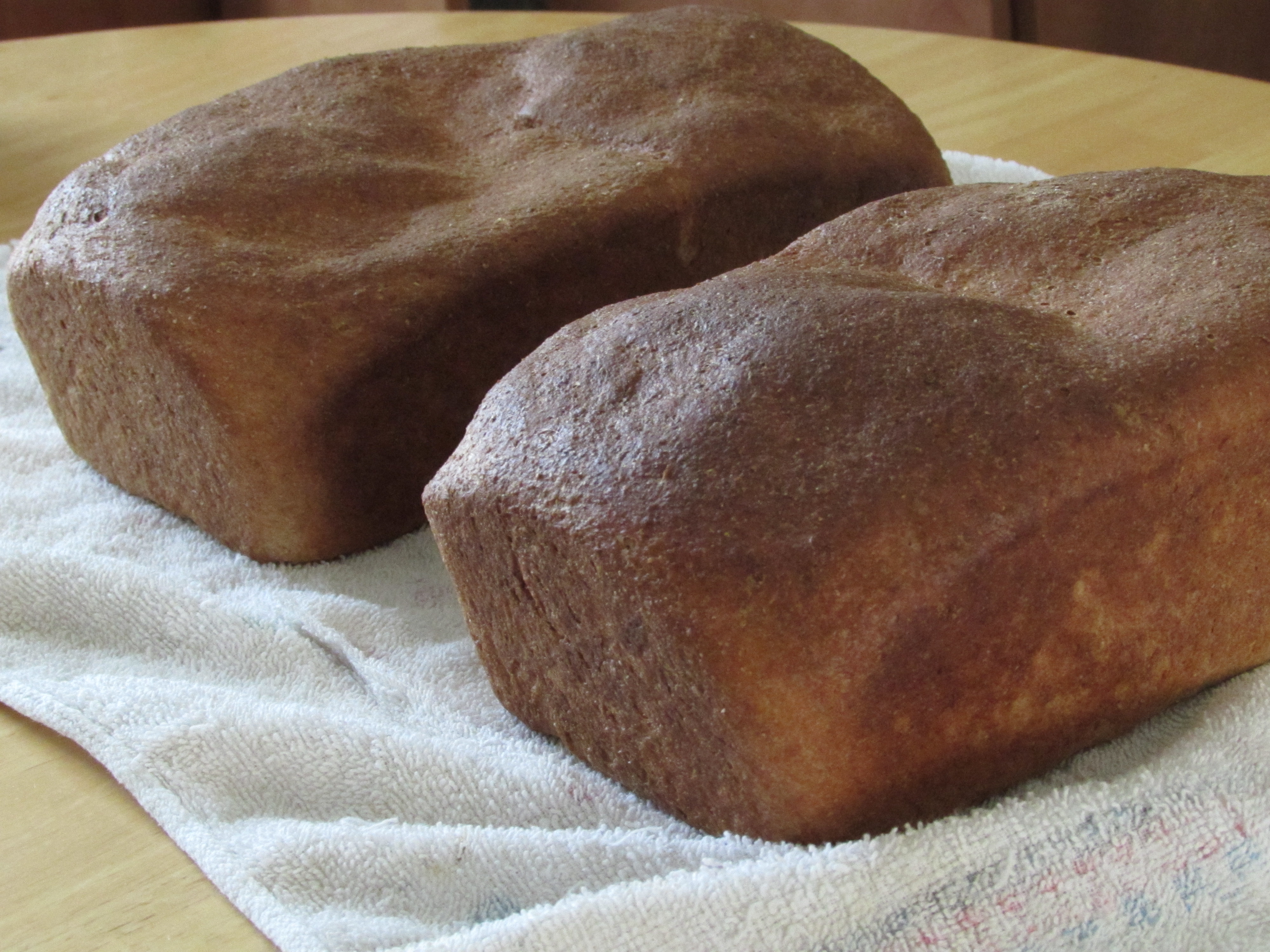 We have started some new adventures at our house: making more food from scratch. I blame Joshua. He looked at what we were spending on bread each week, and said we might be able to save some money if I made it myself. I mulled the idea around for awhile, then finally decided to jump in and see if it was possible.

One day while I Pinterest, I did a search for homemade bread. There were actually quite a lot of recipes that popped up. I found one from the Oregon Cottage that seemed simple enough. The recipe anticipated using a dough hook in an electric mixer, and it didn’t look like it would take all day rise. We headed to Winco to grab some flour and yeast. I already had some honey, so that was no problem.  Armed with the ingredients, I set out to make my first batch of homemade bread.

I had no idea what to expect as I started cooking. The only homemade bread I had ever eaten was Grandma Becker’s homemade bread, but I’d never been around when she baked it. The only thing I knew about baking bread was there was something about letting the dough rise and kneading.  The recipe had simple pictures to follow.   Still, it was not easy when I didn’t know what I was doing.

I had the yeast/water sit for the 15 minutes to create the sponge, and that seemed to rise pretty well. I was feeling pretty confident as I added the honey, oil, and more flour. And then I turned on the mixer. Flour flew everywhere as I started mixing the dough! Luckily it was just a little bit, so I just let my dough keep kneading in the mixer.

After the dough was done kneading, I didn’t need to use a rolling pin to flatten the dough- just some clean hands and arm strength. Again, I was feeling confident as I made my loafs and set them in the pan to rise – but they didn’t rise. The recipe said to wait until they were about 1 to 1 ½ inches above the rim of the loaf pan. Her’s had taken about 45 minutes. I waited for an hour and half, and it still wasn’t even a half inch above the rim. One seemed to be rising, but the other didn’t. I realized I must have done something wrong, so I went ahead and put them into the oven. Again, faithful to the recipe, I turned the loaf pans when I was supposed to and cooked each pan the amount it said. What emerged was something a lot flatter and darker than I was prepared for. I realized that my dark loaf pans absorbed more heat and had cooked my bread faster than I had anticipated.

I pulled the loaves out and waited for them to cool. They didn’t look what I had expected, but how would they taste? After they had cooled a little, I cut small slice and put some butter on it. The taste was excellent! I felt like I was a little girl again, eating some of the homemade bread that Mom brought home after visiting Grandma. And my children didn’t care how they looked – they just cared about the taste!

Since that first attempt, I have made this recipe several times.   I haven’t bought any bread for at least the past two months. I’ve also learned a couple trips that have helped the bread get better with each batch.

I have tried only one other bread – an Irish soda bread that I made for St. Patricks Day. Making bread at home isn’t as bad I thought it would be. If you can clear a couple hours, you can make a nice, homemade loaf of healthy goodness in your very own kitchen! So be adventurous, look for a bread recipe you want to try, and get cookin’!